Study on the documents of Java in Siku Quanshu; Historical knowledge and historians’ point of view

The dissertation discusses various documents on Java collected in Siku Quanshu&nbsp;(Complete Library of Four Treasures). The documents used as the sources of&nbsp;this study are the ones with complete pictures and strong narration on Javanese&nbsp;recorded from Han Dynasty (206 bc&ndash;220 ad) to Ming Dynasty (1364&ndash;1644) in&nbsp;order to reveal what kind of historical knowledge or historical information is&nbsp;delivered by Chinese historians in general and what kind of point of view is used&nbsp;by historians to deliver the notes about Java. Through analytical reading, the&nbsp;readers will find that historians paid attention to three issues: the relationship&nbsp;between China and Java, the condition of Javanese kingdoms and their culture,&nbsp;and the Java land natural resources. People of China regard their country as an&nbsp;ancient country with long history of remarkable civilization which located in the&nbsp;centre of the world. The awareness of how important is their country, indirectly&nbsp;influences the historians&rsquo; points of views. The texts analyzed indirectly prove&nbsp;that some areas on Java are culturally left behind and the countries beyond&nbsp;China, including Java, are the barbaric ones obliging their people to submit or&nbsp;pay tributes to the Kingdoms of China.KeywordsJava, Siku Quanshu, historical knowledge, historians&rsquo; points of views 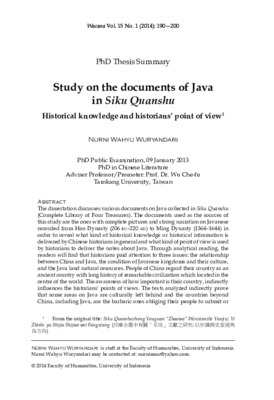 Wacana, Journal of the Humanities of Indonesia

This paper was published in Wacana, Journal of the Humanities of Indonesia.