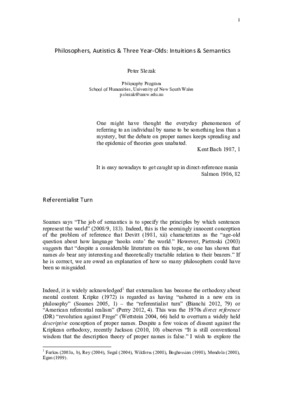 Externalist theories in natural language semantics have become the orthodoxy since Kripke is widely thought to have refuted descriptive theories involving internal cognitive representation of meaning. This shift may be seen in developments in philosophy of language of the 1970s – the direct reference “revolution against Frege” (Wettstein 2004, 66). I consider Fodor’s (2004) heretical thought that something has gone “awfully wrong” in this philosophical consensus, perhaps confirming Chomsky’s (1992) view that the whole field of philosophical semantics is “utterly wrongheaded” and “crazy” by virtue of its non-naturalist assumptions and “methodological dualism.” Kripke acknowledges that he was led to his views by his “natural intuition”. Accordingly, I take up the aetiological question Chomsky poses, suggesting that we may go beyond the usual analysis of those doctrines that have been assumed too uncritically “to ask why they seem so compelling” (2000b, 105). I suggest that the externalist orthodoxy is a kind of cognitive illusion seen elsewhere in philosophy and cognitive science