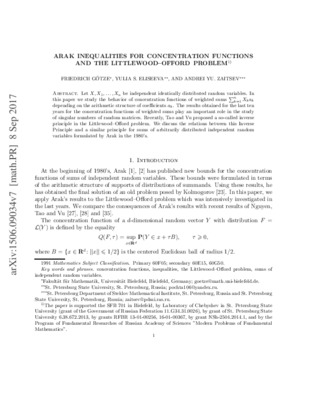 Arak Inequalities for Concentration Functions and the Littlewood-Offord Problem

Let $X,X_1,\ldots,X_n$ be independent identically distributed random variables. In this paper we study the behavior of concentration functions of weighted sums $\sum_{k=1}^{n}a_k X_k$ with respect to the arithmetic structure of coefficients $a_k$ in the context of the Littlewood--Offord problem. Concentration results of this type received renewed interest in connection with distributions of singular values of random matrices. Recently, Tao and Vu proposed an Inverse Principle in the Littlewood-Offord problem. We discuss the relations between the Inverse Principle of Tao and Vu as well as that of Nguyen and Vu and a similar principle formulated for sums of arbitrary independent random variables in the work of Arak from the 1980's.Comment: 21 page