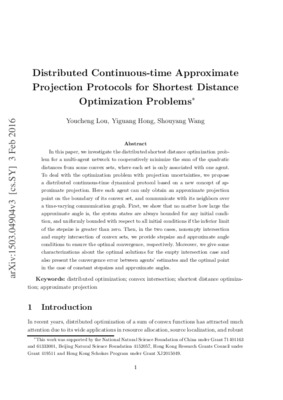 In this paper, we investigate the distributed shortest distance optimization problem for a multi-agent network to cooperatively minimize the sum of the quadratic distances from some convex sets, where each set is only associated with one agent. To deal with the optimization problem with projection uncertainties, we propose a distributed continuous-time dynamical protocol based on a new concept of approximate projection. Here each agent can only obtain an approximate projection point on the boundary of its convex set, and communicate with its neighbors over a time-varying communication graph. First, we show that no matter how large the approximate angle is, the system states are always bounded for any initial condition, and uniformly bounded with respect to all initial conditions if the inferior limit of the stepsize is greater than zero. Then, in the two cases, nonempty intersection and empty intersection of convex sets, we provide stepsize and approximate angle conditions to ensure the optimal convergence, respectively. Moreover, we give some characterizations about the optimal solutions for the empty intersection case and also present the convergence error between agents' estimates and the optimal point in the case of constant stepsizes and approximate angles