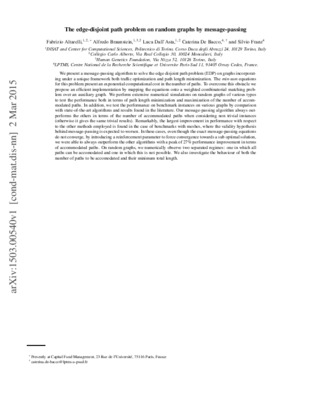 The edge-disjoint path problem on random graphs by message-passing

We present a message-passing algorithm to solve the edge disjoint path problem (EDP) on graphs incorporating under a unique framework both traffic optimization and path length minimization. The min-sum equations for this problem present an exponential computational cost in the number of paths. To overcome this obstacle we propose an efficient implementation by mapping the equations onto a weighted combinatorial matching problem over an auxiliary graph. We perform extensive numerical simulations on random graphs of various types to test the performance both in terms of path length minimization and maximization of the number of accommodated paths. In addition, we test the performance on benchmark instances on various graphs by comparison with state-of-the-art algorithms and results found in the literature. Our message-passing algorithm always outperforms the others in terms of the number of accommodated paths when considering non trivial instances (otherwise it gives the same trivial results). Remarkably, the largest improvement in performance with respect to the other methods employed is found in the case of benchmarks with meshes, where the validity hypothesis behind message-passing is expected to worsen. In these cases, even though the exact message-passing equations do not converge, by introducing a reinforcement parameter to force convergence towards a sub optimal solution, we were able to always outperform the other algorithms with a peak of 27% performance improvement in terms of accommodated paths. On random graphs, we numerically observe two separated regimes: one in which all paths can be accommodated and one in which this is not possible. We also investigate the behaviour of both the number of paths to be accommodated and their minimum total length.Comment: 14 pages, 8 figure