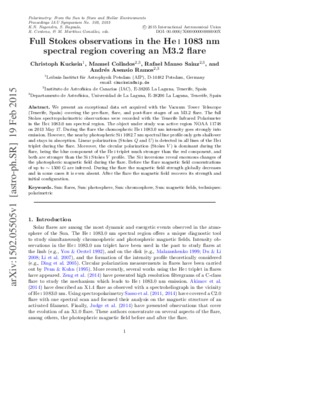 Full Stokes observations in the He I 1083 nm spectral region covering an M3.2 flare

We present an exceptional data set acquired with the Vacuum Tower Telescope (Tenerife, Spain) covering the pre-flare, flare, and post-flare stages of an M3.2 flare. The full Stokes spectropolarimetric observations were recorded with the Tenerife Infrared Polarimeter in the He I 1083.0 nm spectral region. The object under study was active region NOAA 11748 on 2013 May 17. During the flare the chomospheric He I 1083.0 nm intensity goes strongly into emission. However, the nearby photospheric Si I 1082.7 nm spectral line profile only gets shallower and stays in absorption. Linear polarization (Stokes Q and U) is detected in all lines of the He I triplet during the flare. Moreover, the circular polarization (Stokes V) is dominant during the flare, being the blue component of the He I triplet much stronger than the red component, and both are stronger than the Si I Stokes V profile. The Si I inversions reveal enormous changes of the photospheric magnetic field during the flare. Before the flare magnetic field concentrations of up to 1500 G are inferred. During the flare the magnetic field strength globally decreases and in some cases it is even absent. After the flare the magnetic field recovers its strength and initial configuration.Comment: 6 pages, 3 figures, to appear in the conference proceedings of the IAUS 305: "Polarimetry: From the Sun to Stars and Stellar Environments