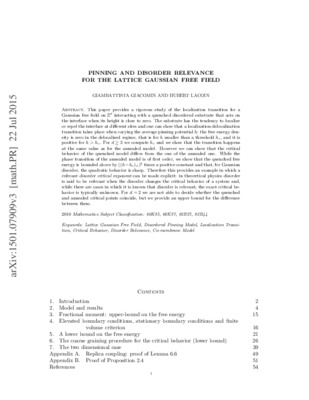 Pinning and disorder relevance for the lattice Gaussian free field

By Giambattista Giacomin and Hubert Lacoin
Get PDF (609 KB)

This paper provides a rigorous study of the localization transition for a Gaussian free field on $\mathbb{Z}^d$ interacting with a quenched disordered substrate that acts on the interface when the interface height is close to zero. The substrate has the tendency to localize or repel the interface at different sites and one can show that a localization-delocalization transition takes place when varying the average pinning potential $h$: the free energy density is zero in the delocalized regime, that is for $h$ smaller than a threshold $h_c$, and it is positive for $h>h_c$. For $d\ge 3$ we compute $h_c$ and we show that the transition happens at the same value as for the annealed model. However we can show that the critical behavior of the quenched model differs from the one of the annealed one. While the phase transition of the annealed model is of first order, we show that the quenched free energy is bounded above by $ (h-h_c)_+^2$ times a positive constant and that, for Gaussian disorder, the quadratic behavior is sharp. Therefore this provides an example in which a {\sl relevant disorder critical exponent} can be made explicit: in theoretical physics disorder is said to be {\sl relevant} when the disorder changes the critical behavior of a system and, while there are cases in which it is known that disorder is relevant, the exact critical behavior is typically unknown. For $d=2$ we are not able to decide whether the quenched and annealed critical points coincide, but we provide an upper bound for the difference between them.Comment: 55 pages, 1 figure. Added a statement on path properties, corrected misprints and reformulated some argument