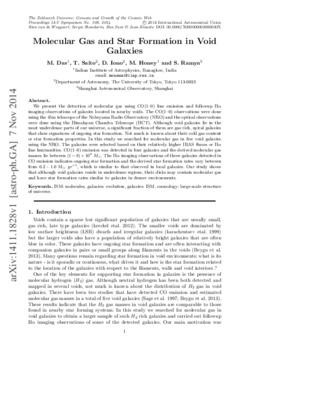 We present the detection of molecular gas using CO(1-0) line emission and follow up Halpha imaging observations of galaxies located in nearby voids. The CO(1-0) observations were done using the 45m telescope of the Nobeyama Radio Observatory (NRO) and the optical observations were done using the Himalayan Chandra Telescope (HCT). Although void galaxies lie in the most under dense parts of our universe, a significant fraction of them are gas rich, spiral galaxies that show signatures of ongoing star formation. Not much is known about their cold gas content or star formation properties. In this study we searched for molecular gas in five void galaxies using the NRO. The galaxies were selected based on their relatively higher IRAS fluxes or Halpha line luminosities. CO(1--0) emission was detected in four galaxies and the derived molecular gas masses lie between (1 - 8)E+9 Msun. The H$\alpha$ imaging observations of three galaxies detected in CO emission indicates ongoing star formation and the derived star formation rates vary between from 0.2 - 1.0 Msun/yr, which is similar to that observed in local galaxies. Our study shows that although void galaxies reside in under dense regions, their disks may contain molecular gas and have star formation rates similar to galaxies in denser environments.Comment: 4 pages, one figure, Proceedings of IAU Symposium 308 "The Zeldovich Universe: Genesis and Growth of the Cosmic Web", 23-28 June 2014, Tallinn, Estoni