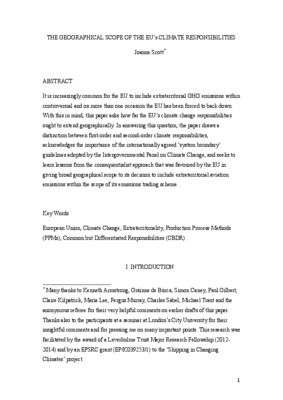 The Geographical Scope of the EU's Climate Change Responsibilities

It is increasingly common for the EU to include extraterritorial GHG emissions within controversial and on more than one occasion the EU has been forced to back down. With this in mind, this paper asks how far the EU’s climate change responsibilities ought to extend geographically. In answering this question, the paper draws a distinction between first-order and second-order climate responsibilities, acknowledges the importance of the internationally agreed ‘system boundary’ guidelines adopted by the Intergovernmental Panel on Climate Change, and seeks to learn lessons from the consequentialist approach that was favoured by the EU in giving broad geographical scope to its decision to include extraterritorial aviation emissions within the scope of its emissions trading scheme