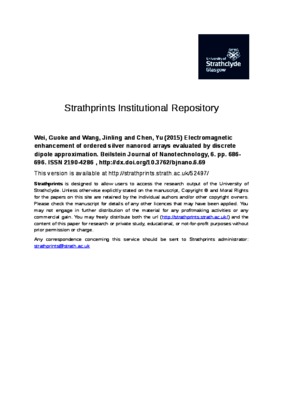 The enhancement factor (EF) of surface-enhanced Raman scattering (SERS) from two-dimensional (2-D) hexagonal silver nanorod (AgNR) arrays were investigated in terms of electromagnetic (EM) mechanism using the discrete dipole approximation (DDA) method. The dependence of EF on several parameters, i.e., structure, length, excitation wavelength, incident angle and polarization, and gap size has been investigated. “Hotspots” were found distributed in the gaps between adjacent nanorods. Simulations of AgNR arrays of different lengths revealed that increasing rod length from 374 to 937 nm (aspect ratio from 2.0 to 5.0) generated more “hotspots” but not necessarily increased EF under both 514 and 532 nm excitations. The narrow lateral gap (in the incident plane) was found to result in strong EF, while the dependence of EF on the diagonal gap (out of the incident plane) showed an oscillating behavior. The EF of the array was highly dependent on the angle and polarization of the incident light. The structure of AgNR and the excitation wavelength were also found to affect the EF. The EF of random arrays was stronger than that of an ordered one with the same average gap of 21 nm, which could be explained by the exponential dependence of EF on the lateral gap size. Our results also suggested that absorption rather than extinction or scattering could be a good indicator of EM enhancement. It is expected that the understanding of the dependence of local field enhancement on the structure of the nanoarrays and incident excitations will shine light on the optimal design of efficient SERS substrates and improved performance