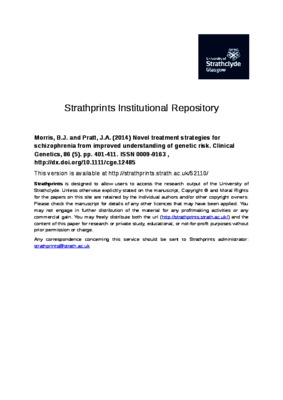 Recent years have seen significant advances in our understanding of the genetic basis of schizophrenia. In particular, genome-wide approaches have suggested the involvement of many common genetic variants of small effect, together with a few rare variants exerting relatively large effects. While unequivocal identification of the relevant genes has, for the most part, remained elusive, the genes revealed as potential candidates can in many cases be clustered into functionally-related groups which are potentially open to therapeutic intervention. In this review, we summarise this information, focussing on the accumulating evidence that genetic dysfunction at glutamatergic synapses and post-synaptic signalling complexes contributes to the aetiology of the disease. In particular, there is converging support for involvement of post-synaptic JNK pathways in disease aetiology. An expansion of our neurobiological knowledge of the basis of schizophrenia is urgently needed, yet some promising novel pharmacological targets can already be discerned