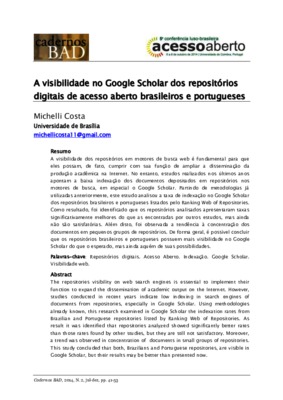 The repositories visibility on web search engines is essential to implement their function to expand the dissemination of academic output on the Internet. However, studies conducted in recent years indicate low indexing in search engines of documents from repositories, especially in Google Scholar. Using methodologies already known, this research examined in Google Scholar the indexation rates from Brazilian and Portuguese repositories listed by Ranking Web of Repositories. As result it was identified that repositories analyzed showed significantly better rates than those rates found by other studies, but they are still not satisfactory. Moreover, a trend was observed in concentration of documents in small groups of repositories. This study concluded that both, Brazilians and Portuguese repositories, are visible in Google Scholar, but their results may be better than presented now