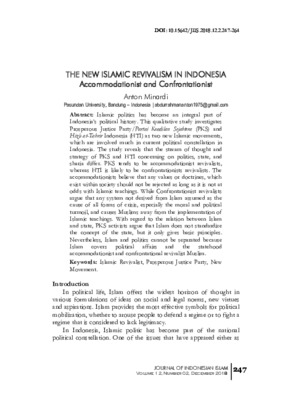 THE NEW ISLAMIC REVIVALISM IN INDONESIA: Accommodationist and Confrontationist

Islamic politics has become an integral part of Indonesia’s political history. This qualitative study investigates Prosperous Justice Party/Partai Keadilan Sejahtera (PKS) and Hizb at-Tahrir Indonesia (HTI) as two new Islamic movements, which are involved much in current political constellation in Indonesia. The study reveals that the stream of thought and strategy of PKS and HTI concerning on politics, state, and sharia differ. PKS tends to be accommodationist revivalists, whereas HTI is likely to be confrontationists revivalists. The accommodationists believe that any values or doctrines, which exist within society should not be rejected as long as it is not at odds with Islamic teachings. While Confrontationist revivalists argue that any system not derived from Islam assumed as the cause of all forms of crisis, especially the moral and political turmoil, and causes Muslims away from the implementation of Islamic teachings. With regard to the relation between Islam and state, PKS activists argue that Islam does not standardize the concept of the state, but it only gives basic principles. Nevertheless, Islam and politics cannot be separated because Islam covers political affairs and the statehood accommodationist and confrontational revivalist Muslim