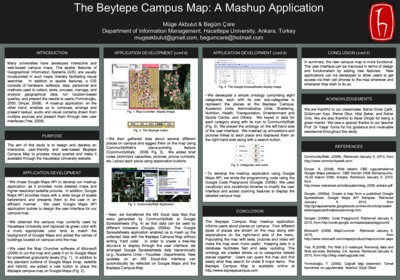 By Müge Akbulut and Begüm Çare
Get PDF (374 KB)

Many universities have developed interactive and web-based campus maps. The spatial features of Geographical Information Systems (GIS) are usually incorporated in such maps, thereby facilitating visual searches. The aim of this study is to design and develop an interactive, user-friendly and web-based Beytepe Campus Map to process visual queries. The Google Maps API application builder has been used to design the user interface for our campus map. Data has been gathered about several different places on campus and they were tagged on the map using CommunityWalk’s place-pointing feature. Brief notes (dormitory capacities, pictures, phone numbers, etc.) about each place using explanation buttons have been added. A simple ontology comprising eight categories, each with its own sub-categories to represent the places at the Beytepe Campus has been developed. The MapCruncher software of Microsoft has been used to cut the map and paste it on to Google Maps for predefined granularity levels. A new button added to place the Beytepe campus map on Google Maps. To develop the mashup application using Google Maps API, we wrote the programming code using the Google Code Playground. We used JavaScript and JavaScript libraries to modify the user interface. In summary, the new campus map is more functional. The user interface can be improved in terms of design and functionality by adding new features