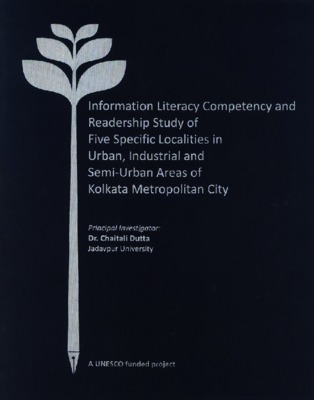 The Department of Library and Information Science, Jadavpur University, Kolkata, India, in association with UNESCO, completed a research study to measure information literacy competency and reading habits amongst the urban and semi-urban habitats in a metropolitan city in India. This study report seeks to identify and critically examine the information literary competency and reading habits of mixed habitats, having contrasting professions or vocations. The objectives of this field study were: • To attempt a critical study of the readership of people from different social strata of five specific localities of Kolkata metropolitan city; • To attempt a study of the influence and to measure the encroachment of different media on people’s reading habit; • To attempt an assessment of the probable causes behind the difference in pattern of the reading habits of people in different localities of Kolkata metropolitan city; • To attempt an assessment of the role played by public libraries in promoting reading habits; • To attempt a mapping of the information literacy competency level of people living in Urban, Industrial and Semi-Urban areas of Kolkata metropolitan city; • To attempt to reach a viable conclusion from the results of the study. This report illustrates information seeking behaviour of diverse groups of habitats, including youths, women, industrial workers and elderly persons. This study concludes that • Most of the respondents in the present sample are aged between 31 and 50 and are in service. • The number of men who do not read regularly far exceeds the number of women in the same category. • Older people have mostly managed to cling on to their habit of reading. • Among the non-print media, television attracts most respondents. • Women are more prone to use libraries for satisfaction of their reading needs. • Reading still survives, despite the electronic media boom. The public libraries in the city play wider role to inculcate reading habits amongst youths and neo-literates. This study suggests that information literacy competency and lifelong education can also be imparted to marginalized group through public library networks in the country