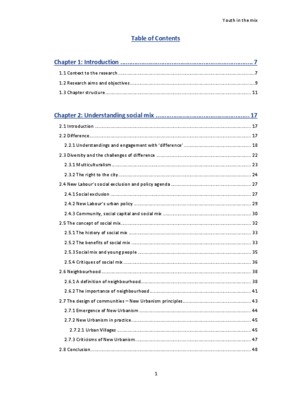 Youth in the mix: An exploration of young people's position in a neighbourhood designed for social mix

By Kirsten Owen
Get PDF (9 MB)

Social mix was a common feature of many New Labour neighbourhood-based policies. Within this vision young people are socially constructed as catalysts for social mixing. It was imagined that both their presence and use of local amenities would ensure interaction across pre-existing social divides. Using an innovative mixed methods approach, the research investigated whether young people in a mixed tenure neighbourhood fulfilled this vision. The thesis argues that a number of limitations exist to this vision for young people in the social mix agenda. Young people’s access to amenities such as public space and schools, key sites in this vision, are limited and controlled thereby reducing opportunities for social mixing. Furthermore, processes operating beyond the mixed tenure neighbourhood work to undermine social mix aspirations. Most notably, young people, especially those perceived to be from disadvantaged backgrounds, are socially constructed as ‘other’ and to be avoided, in direct conflict to social mix constructions. Rather than pre-existing social divides being abolished, the thesis proposes that those with the most power ensure that such divides are maintained and even strengthened