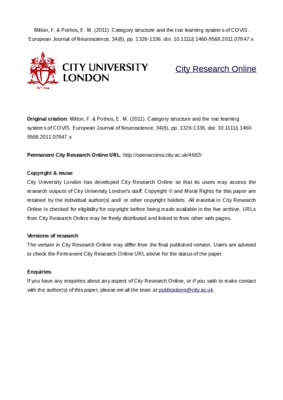 Category structure and the two learning systems of COVIS

An influential multi-process model of category learning, COVIS, suggests that a verbal or a procedural category learning process is adopted, depending on the nature of the learning problem. While the architectural assumptions of COVIS have been widely supported, there is still uncertainty regarding the types of category structures that are likely to engage each of the COVIS systems. We examined COVIS in an fMRI study with two novel (in terms of COVIS research) categorizations. One of the categorizations could be described by a simple, unidimensional, rule that was expected to favor the verbal system. The other categorization possessed characteristics typically associated with the procedural system, but could also potentially be verbalized using a rule more complex than the ones previously associated with the verbal system. We found that both categorizations engaged regions associated with the verbal system. Additionally, for both categorizations, frontal lobe regions (including left ventrolateral frontal cortex) were more engaged in the first compared to the second session, possibly reflecting the greater use of hypothesis–testing processes in the initial stages of category acquisition. In sum, our results extend our knowledge of the conditions under which the verbal system will operate. These findings indicate that much remains to be understood concerning the precise interplay of the verbal and procedural categorization systems