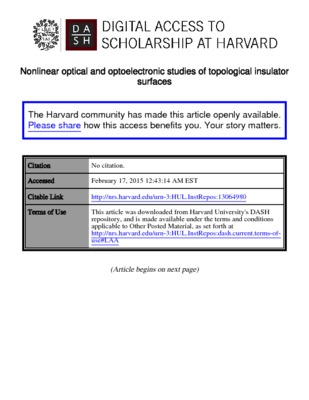 Since their experimental discovery in 2008, topological insulators have been catapulted to the forefront of condensed matter physics research owing to their potential to realize both exciting new technologies as well as novel electronic phases that are inaccessible in any other material class. Their exotic properties arise from a rare quantum organization of its electrons called ``topological order,'' which evades the conventional broken symmetry based-classification scheme used to categorize nearly every other state of ordered matter. Instead, topologically ordered phases are classified by topological invariants, which characterize the phase of an electron's wavefunction as it moves through momentum space. When a topologically ordered phase is interfaced with an ordinary phase, such as the vacuum, a novel metallic state appears at their shared boundary. In topological insulators, this results in the formation of a two-dimensional metallic state that spans all of its surfaces. The surface state electronic spectrum is characterized by a single linearly dispersing and helically spin-polarized Dirac cone that is robust against disorder. The helical nature of the surface Dirac cone is highly novel because the Dirac electrons carry a net magnetic moment and are capable of transporting 100% spin-polarized electrical currents, which are the long-sought electronic properties needed for many spin-based electronic applications. However, owing to the small bulk band gap and intrinsic electronic doping inherent to these materials, isolating the surface electronic response from the bulk has proven to be a major experimental obstacle. In this thesis, we demonstrate the means by which light can be used to isolate and study the surface electronic response of topological insulators using optoelectronic and nonlinear optical techniques. In chapter 1, we overview the physics of topological order and topological insulators. In chapter 2, we show how polarized light can be used to generate and control surface electrical currents that originate from the helical Dirac cone. In chapter 3, we demonstrate that the nonlinear second harmonic generation of light from a topological insulator is a sensitive surface probe and can be used to detect the breaking of space-time symmetries and monitor changes in the surface carrier density.Physic