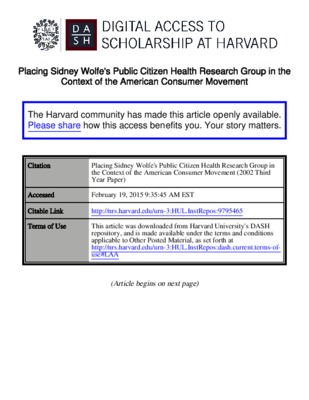 This paper summarizes the author’s attempt to understand the role and the activist efforts of the Public Citizen’s Health Research Group under the direction of Sidney Wolfe in the context of the American consumer movement. This understanding is gained (1) by performing some historical analyses and (2) by doing 1 a miniature case study. The historical analyses involved research in the history of the consumer activist movement and then a formulation and threading of some of the major recurrent themes in the consumer movement. The main themes uncovered and discussed were: (1) a general skepticism towards advertisements, (2) the significant role of women in the movement, (3) the ideology that more regulation is better regulation, and (4) the general connection of the movement with contemporary social reform movements. Finally, a case study was done. This involved obtaining, organizing and analyzing approximately 85 primary source documents, which consisted of published letters, petitions, testimonies and various other papers produced by the Health Research Group during the 1997-2002 time period. The methodology for the case study is presented in this paper, as are four interesting trends about risk/benefit analysis, what constitutes “research” and the relationship between authorship and credibility. At the end of the paper, I make some concluding remarks about remaining questions that still need to be answered