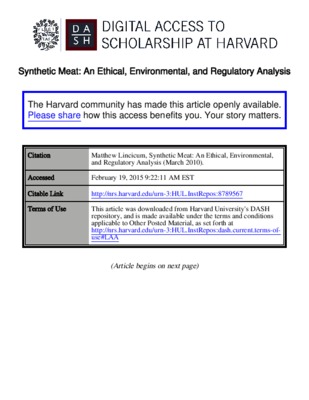 Once relegated to the domain of science fiction, recent technological developments have rendered the production of synthetic meat—meat grown in a laboratory rather than as an animal—a real possibility. Currently available methods show promise for synthetically manufacturing processed meats, while growing fully formed, complex muscle structures—such as steaks—continues to face technical difficulties. With this strange new possibility rapidly approaching, this Paper considers two problems that the new meat may solve, and one problem that it creates. First, synthetic meat has the potential to alleviate many if not all of the moral qualms associated with eating animal meat. Second, synthetic meat could present a far more environmentally sustainable approach to supplying food than the conventional farm-based system. This new meat, however, faces an as-yet unanswered question: how will it fare in the regulatory process? The USDA and FDA have naturally not yet had occasion to address this nascent issue. This Paper seeks to present the likely response of these regulatory bodies to the introduction of synthetic meat into the marketplace. Ultimately, the budding prospect of synthetic meat carries with it the potential for vast improvements over traditional meat production, while also facing the uncertain response from the US regulatory bodies charged with ensuring food safety. Although the regulatory hurdles are very real, this Paper concludes that the significant benefits offered justify the continued pursuit of this exciting new technology