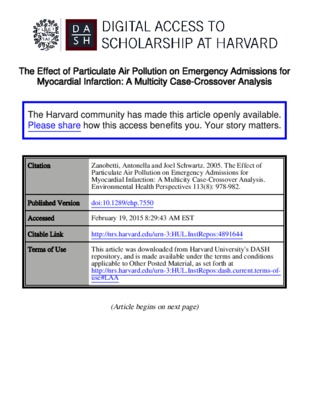 The Effect of Particulate Air Pollution on Emergency Admissions for Myocardial Infarction: A Multicity Case-Crossover Analysis

By Antonella Zanobetti and Joel David Schwartz
Get PDF (189 KB)

Recently, attention has focused on whether particulate air pollution is a specific trigger of myocardial infarction (MI). The results of several studies of single locations assessing the effects of ambient particular matter on the risk of MI have been disparate. We used a multicity case-crossover study to examine risk of emergency hospitalization associated with fine particulate matter (PM) with aerodynamic diameter 300,000 MIs during 1985–1999 among elderly residents of 21 U.S. cities. We used time-stratified controls matched on day of the week or on temperature to detect possible residual confounding by weather. Overall, we found a 0.65% [95% confidence interval (CI), 0.3–1.0%] increased risk of hospitalization for MI per 10 μg/m3 increase in ambient PM10 concentration. Matching on apparent temperature yielded a 0.64% increase in risk (95% CI, 0.1–1.2%). We found that the effect size for PM10 doubled for subjects with a previous admission for chronic obstructive pulmonary disease or a secondary diagnosis of pneumonia, although these differences did not achieve statistical significance. There was a weaker indication of a larger effect on males but no evidence of effect modification by age or the other diagnoses. We also found that the shape of the exposure–response relationship between MI hospitalizations and PM10 is almost linear, but with a steeper slope at levels of PM10 < 50 μg/m3. We conclude that increased concentrations of ambient PM10 are associated with increased risk of MI among the elderly