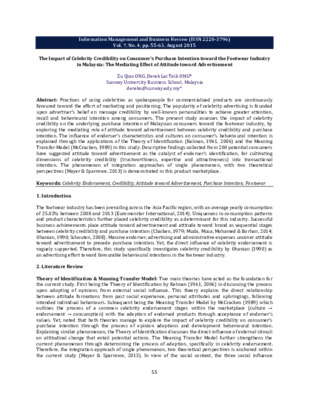 The Impact of Celebrity Credibility on Consumerâ€™s Purchase Intention toward the Footwear Industry in Malaysia: The Mediating Effect of Attitude toward Advertisement

Practices of using celebrities as spokespeople for commercialized products are continuously favoured toward the effort of marketing and positioning. The popularity of celebrity advertising is founded upon advertiserâ€™s belief on message credibility by well-known personalities to achieve greater attention, recall and behavioural intention among consumers. The present study assesses the impact of celebrity credibility on the underlying purchase intention of Malaysian consumers toward the footwear industry, by exploring the mediating role of attitude toward advertisement between celebrity credibility and purchase intention. The influence of endorserâ€™s characteristics and cultures on consumerâ€™s behavioural intention is explained through the applications of the Theory of Identification (Kelman, 1961, 2006) and the Meaning Transfer Model (McCracken, 1989) in this study. Descriptive findings collected from 200 potential consumers have suggested attitude toward advertisement as the catalyst of endorserâ€™s identification, for cultivating dimensions of celebrity credibility (trustworthiness, expertise and attractiveness) into transactional intention. The phenomenon of integration approaches of single phenomenon, with two theoretical perspectives (Mayer & Sparrowe, 2013) is demonstrated in this product marketplace