"A Star of the First Magnitude within the Philosophical World": Introduction to Life and Work of Gustav Teichmüller

In 1871, the German philosopher Gustav Teichmüller (1832-1888) moved from his Basel chair to the much better paid chair in Tartu, and taught there until his untimely death. Besides philosophy, he had studied various disciplines, including the natural sciences. In the preparation of his own philosophy, he explored the history of philosophy for more than twenty years and made pioneering contributions to the history of concepts. Only by the early-1880s did he begin to elaborate his "new philosophy", an original version of personalism, both anti-idealist and anti-materialist. He did this in three major works (Die wirkliche und die scheinbare Welt&nbsp;1882, Religionsphilosophie&nbsp;1886, Neue Grundlegung der Psychologie und Logik, posthumous 1889) which built upon each other. Unwritten remained the keystone of his philosophy, the Philosophie des Christentums, in which Teichmüller wanted to show that the philosophical contents of Christianity were encapsulated by his own personalism. One major objective of his philosophy, as I see it, was regaining reality---in particular the reality of the person---after it had been lost in the wake of the failure of modern representationalism. Notwithstanding its coherentist elements, I see Teichmüller's philosophy as a precursor of direct realism. Although he fell into oblivion soon after, his thoughts were received throughout Europe, notably by Friedrich Nietzsche, Aleksey Kozlov and Nicholas Lossky. His extensive literary remains, which are kept in Basel, remain to be explored 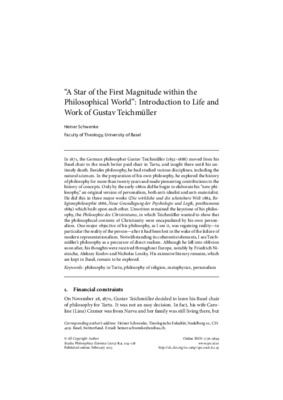 Journals from University of Tartu

This paper was published in Journals from University of Tartu.