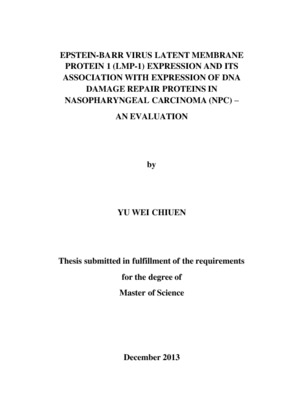 Nasopharyngeal carcinoma (NPC) is the third most occurring cancer in Malaysian males, and is unique in its association with Epstein-Barr virus (EBV). LMP-1 is the major oncogenic protein of the EBV. EBV LMP-1 acts by constitutive regulation of host signalling pathways leading to dysregulated cell growth and has been considered a potential therapeutic target for LMP-1 expressing tumours. LMP-1 is thought to be regulated in its expression as it is not expressed in all NPC tumours. DNA repair proteins are of importance in this context as the status of the function of these proteins has been linked to the process of carcinogenesis. Studies world-wide have shown co-infection of NPC by Human papilloma virus (HPV). The status in Malaysia is not known. In the present study, the importance of viral co-infection in NPC and how it influences the expression of the EBV and host proteins has been evaluated. Fifty seven (57) NPC and twenty seven (27) benign adenoid samples from State of Kelantan in Malaysia were included in this study. Expression of DNA repair proteins such as ATM, DNA-PKcs, Ku70, Ku86, pro and active caspase-3 protein were evaluated immunohistochemically. The viral status of the lesions was evaluated using PCR on extracted DNA from the tumour/benign tissues. Results showed that LMP-1 expression showed a positive correlation with the expression of ATM, and active caspase-3