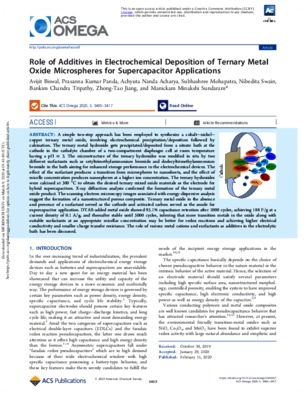 A simple two-step approach has been employed to synthesize a cobalt–nickel–copper ternary metal oxide, involving electrochemical precipitation/deposition followed by calcination. The ternary metal hydroxide gets precipitated/deposited from a nitrate bath at the cathode in the catholyte chamber of a two-compartment diaphragm cell at room temperature having a pH ≈ 3. The microstructure of the ternary hydroxides was modified in situ by two different surfactants such as cetyltrimethylammonium bromide and dodecyltrimethylammonium bromide in the bath aiming for enhanced storage performance in the electrochemical devices. The effect of the surfactant produces a transition from microspheres to nanosheets, and the effect of micelle concentration produces nanospheres at a higher ion concentration. The ternary hydroxides were calcined at 300 °C to obtain the desired ternary mixed oxide materials as the electrode for hybrid supercapacitors. X-ray diffraction analysis confirmed the formation of the ternary metal oxide product. The scanning electron microscopy images associated with energy-dispersive analysis suggest the formation of a nanostructured porous composite. Ternary metal oxide in the absence and presence of a surfactant served as the cathode and activated carbon served as the anode for supercapacitor application. DTAB-added metal oxide showed 95.1% capacitance retention after 1000 cycles, achieving 188 F/g at a current density of 0.1 A/g, and thereafter stable until 5000 cycles, inferring that more transition metals in the oxide along with suitable surfactants at an appropriate micellar concentration may be better for redox reactions and achieving higher electrical conductivity and smaller charge transfer resistance. The role of various metal cations and surfactants as additives in the electrolytic bath has been discussed