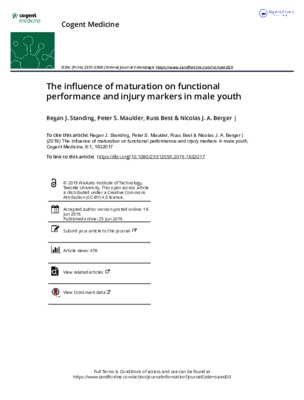 The aim of this study was to identify the influence of maturation on sprinting and jump performances, whilst quantifying injury markers in 95 youth males (age 13.2–15.7y). Comparative statistics were performed between maturation groups, identifying significant differences (p < 0.05) in all measured anthropometric variables. Sprint and jump performances were positively influenced (ES = trivial to large) by maturation status, whereas injury markers revealed no significant differences between groups. Increases in limb length, muscle size and muscular force output due to corresponding neuromuscular maturation, may help account for these improvements. Individuals’ within the circa PHV group exhibit a larger variability in sprint and jump performance when compared to the pre or post maturation groups. This variability may be attributed to the under-researched phenomenon of “adolescent awkwardness”. To conclude, performance characteristics of youth of similar chronological age vary considerably based on biological maturation, which may have consequences for long-term athlete development