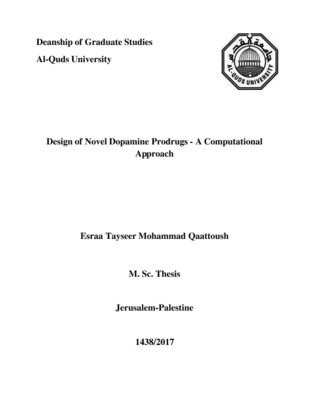 Parkinson patients have insufficient dopamine in specific regions of the brain, so attempts have been made to replenish the deficiency in the dopamine. Dopamine itself doesn't cross blood brain barrier, but its precursor, levodopa (LD) is actively transported into the CNS and is converted to dopamine in the brain. The bioavailability of LD is less than 10% with only 1% of administered oral levodopa penetrates the brain. Large doses of levodopa are required because much of the drug is decarboxylated to dopamine in the periphery, resulting in side effects that include nausea, vomiting, cardiac arrhythmias, and hypotension. To minimize the conversion to dopamine (DA) outside the central nervous system (CNS), LD is usually co-administered with peripheral inhibitors of amino acid decarboxylase (carbidopa or benserazide). In spite of that, other central nervous side effects such as dyskinesia, on-off phenomenon and end-of-dose deterioration still remain. In this project, a number of dopamine prodrugs were designed using DFT molecular orbital at B3LYP 6-31G (d, p) levels and molecular mechanics (MM2) calculations aiming to provide prodrugs that are expected to give better bioavailability than the parental drug owing to improved absorption. Furthermore, the proposed prodrugs are believed to be more effective than L-dopa because the latter undergoes decarboxylation in the periphery before reaching the blood–brain barrier. The DFT calculation results revealed that the rate of a proton transfer in processes dopamine ProD 1-ProD 5 is largely dependent on the geometric variations of thereactant (GM) mainly the distance between the two reactive centers, rGM, and the angle of attack α. It was found that systems with low rGM and high α values in their global minimum structures, such as ProD 1 and ProD 2, exhibit much higher rates (lower ∆G‡ ) than these with high rGM and low α values, such as ProD 3-ProD 5 and the rate of the reaction is linearly correlated with rGM and (1/α). Moreover, it was found that the intraconversion rate of the designed dopamine prodrugs is largely determined on the strain energies of the reaction ̓s tetrahedral intermediates(EsINT). Systems having strained tetrahedral intermediates were found to be with low rates and vice versa