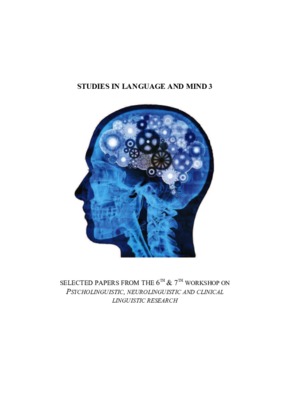 The Romani system of tense-aspect-modality categories consists of three dimensions: aspectual (perfective : non-perfective), temporal (remote : non-remote), and modal (the category “intentionality”). Aspect is expressed as an extension to the verb stem: the perfective aspect is marked with a perfective marker added to the stem in order to express a completed event, whereas the absence of perfectivity provides an ongoing perspective (Matras 2001). This paper reports on a pilot study of verbal aspect in the Gurbet variety of Romani spoken by elementary-school children in eastern Serbia (the village of Minićevo, next to the town of Knjaževac). Participants (7 Romani-Serbian bilingual children aged 7 to 10) were shown short non-verbal cartoons from the serial “Die Sendung mit der Maus”. Participants were asked to retell the content of the cartoons and their production was video-recorded and transcribed. The research was conducted in November 2017, and the material is available in the Digital Archive of the Institute for Balkan Studies (Belgrade). The analysis is based on 23 narratives revealing the following tendencies: perfective markers are added to the verb stems to express completed events; ongoing events are typically unmarked for perfectivity; verbs unmarked for perfectivity additionally refer to completed events; Serbian loanverbs, morphologically adapted to Romani, are used to convey the aspect; and perfectivity is additionally achieved by borrowing Serbian prefixes. Although the majority of verbs behave in the expected way in terms of aspect, several exceptions are observed, suggesting that the choice of a verb form (perfective vs. nonperfective) might refer to the temporal dimension of an event, to its iterativity, or moreover be used for the narrative purposes