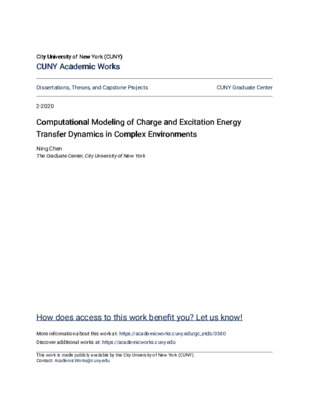 This thesis describes computational simulations of charge and exciton dynamics and quantum calculations of organic conjugated oligomers. A comprehensive computational study of charge hopping dynamics was conducted for a model of disordered chain of sites coupled to quantum environments. Time-dependent mean square displacement, diffusion constant, and mobility were calculated by three different computational methods for solving the master equation, which validate the accuracy of calculations. Approximate rate kernels were also tested to understand the effects of approximations in representing quantum environments. In addition to the effects of temperature and disorder, different values of the gradient in the site energy were examined to gain insight into the potential role of external electric field. Extension of the simulation to two dimensional systems provides insight into the effects caused by the interplay between disorder and dimensionality. Similar computational modeling was conducted for the case of excitation energy transfer dynamics, where the small electronic coupling and large system bath coupling also result in the hopping mechanism. This simulation involved more parameters such as the orientational factor and lifetime. The simulation results were sensitive to temperature and disorder. In particular, it was shown that orientational disorder significantly reduces the time dependent mean square displacement compared to ordered structure. Computational study was conducted for a conjugated oligomer called poly(2,5-di(2\u27-ethylhexyloxy)-1,4-phenylenevinelene) employing density functional and time dependent density functional methods. The absorption and emission energies with respect to the length of oligomers were studied. The dependences of these energies on the length of oligomer were modeled by simple theoretical models including the Frenkel exciton model. Brownian oscillator spectral density model was used to represent the quantum environmental degrees of freedom coupled to two-level electronic states between which absorption and emission processes occur. The Fermi\u27s Golden Rule expression was employed to calculate lineshapes for this model, and the effects of different parameters on the features of lineshape were examined in detail

Topics: Physical Chemistry, Quantum Physics
Publisher: CUNY Academic Works
Year: 2020
OAI identifier: oai:academicworks.cuny.edu:gc_etds-4619
Provided by: City University of New York
Download PDF:
Sorry, we are unable to provide the full text but you may find it at the following location(s):