Prior to 1841, Sarawak was just a small province of the Sultanate Brunei, and was administered by the Governor, who was the Sultan'& representative. James Brooke acting in a private capacity as an adventurer and trader was instrumental in bringing peace, to the province in 1841. In return for his aid Raja Muda Hashim, the Sultan’ 6 uncle and heir presumptive of the Sultan of Brunei, transferred the government of Sarawak to Brooke, who then styled himself "Rajah” . This was the beginning of Sarawak modern history. The Brooke family ruled Sarawak for about a century till 1946. Immediately after the Second World War, Sin Charles Vyner Brooke, the Third, and last, White Rajah ceded Sarawak to Britain. Thus, Sarawak became a Crown Colony in July, 1946. The cession of Sarawak to Britain created a lot of "unhappiness1' with certain portions o£ the population especially with the Malays. As a result, " anti cessionist" movements were organised in Sarawak. Though unsuccessful, their activities climaxed with the murder of Mr. Duncan Stewart, the Second {Colonial) Governor of Sarawak in 1949. Constitutionally, Sarawak develop at a much faster rate under the British Colonial administration, and the people were slowly but surely entrusted with the governance of their own country 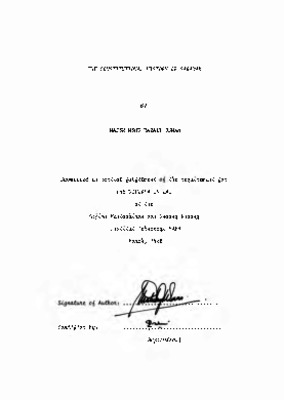