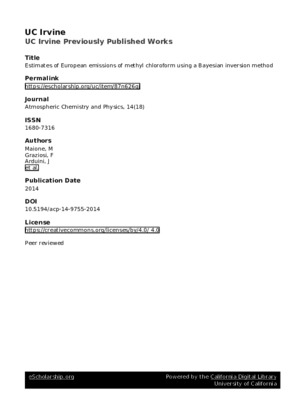 © 2014 Author(s). Methyl chloroform (MCF) is a man-made chlorinated solvent contributing to the destruction of stratospheric ozone and is controlled under the "Montreal Protocol on Substances that Deplete the Ozone Layer" and its amendments, which called for its phase-out in 1996 in developed countries and 2015 in developing countries. Long-term, high-frequency observations of MCF carried out at three European sites show a constant decline in the background mixing ratios of MCF. However, we observe persistent non-negligible mixing ratio enhancements of MCF in pollution episodes, suggesting unexpectedly high ongoing emissions in Europe. In order to identify the source regions and to give an estimate of the magnitude of such emissions, we have used a Bayesian inversion method and a point source analysis, based on high-frequency long-term observations at the three European sites. The inversion identified southeastern France (SEF) as a region with enhanced MCF emissions. This estimate was confirmed by the point source analysis. We performed this analysis using an 11-year data set, from January 2002 to December 2012. Overall, emissions estimated for the European study domain decreased nearly exponentially from 1.1 Gg yrg'1 in 2002 to 0.32 Gg yrg'1 in 2012, of which the estimated emissions from the SEF region accounted for 0.49 Gg yrg'1 in 2002 and 0.20 Gg yrg'1 in 2012. The European estimates are a significant fraction of the total semi-hemisphere (30-90° N) emissions, contributing a minimum of 9.8% in 2004 and a maximum of 33.7% in 2011, of which on average 50% are from the SEF region. On the global scale, the SEF region is thus responsible for a minimum of 2.6% (in 2003) and a maximum of 10.3% (in 2009) of the global MCF emissions