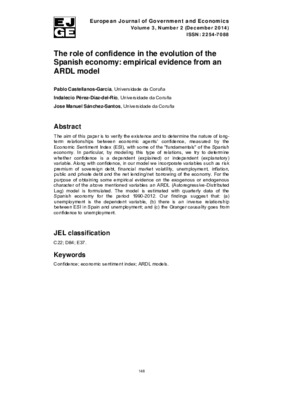 The role of confidence in the evolution of the Spanish economy: empirical evidence from an ARDL model

The aim of this paper is to verify the existence and to determine the nature of long-term relationships between economic agents' confidence, measured by the Economic Sentiment Index (ESI), with some of the "fundamentals" of the Spanish economy. In particular, by modeling this type of relations, we try to determine whether confidence is a dependent (explained) or independent (explanatory) variable. Along with confidence, in our model we incorporate variables such as risk premium of sovereign debt, financial market volatility, unemployment, inflation, public and private debt and the net lending/net borrowing of the economy. For the purpose of obtaining some empirical evidence on the exogenous or endogenous character of the above mentioned variables an ARDL (Autoregressive-Distributed Lag) model is formulated. The model is estimated with quarterly data of the Spanish economy for the period 1990-2012. Our findings suggest that: (a) unemployment is the dependent variable, (b) there is an inverse relationship between ESI in Spain and unemployment; and (c) the Granger causality goes from confidence to unemployment