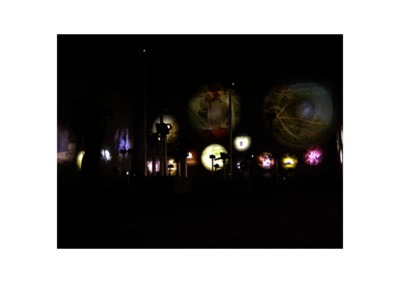 120 modern day ‘magic lanterns’ grouped in a series of narrative sequences and photographic tableaux are distributed unevenly throughout the cavernous space of the former church. Two types of images are projected. The first type are from the collection of images that Mark Ingham has been using for the past few years in his research. These images will occupy the smaller rectangular space at the end of the church. The second type of image will use photographs taken over recent months of the inside and outside of Dilston Grove and its locale. These latter images will create a site specific installation that will attempt to deconstruct the physical and political dimensions of the space and will be sited in the main body of the building. 'The Great Art of Light and Darkness' is the title of a work on optics and the phases of the moon by Athanasius Kircher. Kircher was a leading scholar in his time of natural sciences and mathematics. In 1646 he published the first edition of this book and in it he described a projecting device, equipped with a focusing lens and a mirror, either flat or parabolic. Kircher described the construction of this ‘magic lantern’ by writing: "Make ... a wooden box and put on it a chimney, so that the smoke of the lamp in the box is on a level with the opening, and insert in the opening a pipe or tube. The tube must contain a very good lens, but at the end of the tube...fasten the small glass plate, on which is painted an image in transparent water colours. Then the light of the lamp, penetrating through the lens and through the image on the glass (which is to be inserted... upside down) will throw an upright, enlarged coloured image on the white wall opposite.” When Mark Ingham started to use SLR film cameras as projection devices he wrote: ‘In a blackened out room light from a torch shines through a slide and on through the back of a backless old camera. A transparent, fleeting image captured by this same camera many years ago projects outwards from it. A white wall intervenes, to reveal a glowing circle of dappled coloured light. The lens of the camera/projector focuses the image.’ He sees his camera projectors as the direct descendant of those early ‘magic lanterns’, but instead of a wooden box and a lens he uses an SLR film camera. Replacing the smoky lamp he has cool running Light Emitting Diode spotlights and the ‘transparent water colours’ are replaced by photographic transparencies. The transparency is still inserted upside down in the device and enlarged colour images will be projected on to the walls of the Dilston Grove exhibition space in May-June 2008