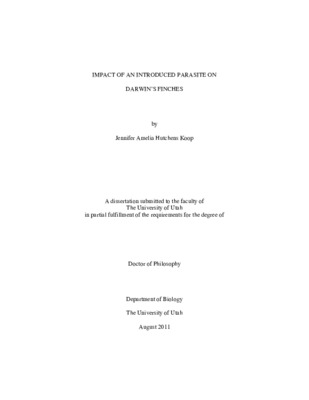 dissertationInvasive parasites are a growing problem as humans continue to traverse the globe. The impact invasive parasites have on naive host populations is the focus of my dissertation. To date, the Galapagos Islands remain one of the most well-preserved archipelagos, with no known extinctions of endemic bird species. However, the recent introduction of Philornis downsi, an obligate nest parasite, threatens birds across the islands, including the iconic Darwin's finches. Using an experimental manipulation of parasite abundance in nests, my work shows the detrimental effect P. downsi has on fledging success in medium ground finches (Geospiza fortis). I explore the mechanisms underlying these effects by investigating the impact of P. downsi on nestling growth and condition. I demonstrate that adult medium ground finches and seven other species of Darwin's finches produce P. downsi-specific antibodies. Nestling medium ground finches did not have detectable P. downsi-specific antibodies nor was there evidence of maternally transferred antibodies. Parental behavior also changed in response to P. downsi parasitism, though neither immunological nor behavioral responses were effective against P. downsi, and did not result in increased host reproductive success. Finally, using data from my three-year study, I present a model that predicts population viability of medium ground finches in light of the observed effects of P. downsi on host fitness. The model predicts that medium ground finches on the island of Santa Cruz are likely to go extinct within the next half century unless conservation efforts are able to significantly reduce P. downsi populations. My work highlights the dramatic impact an introduced parasite can have on naive host populations. Parasites with low host-specificity and high rates of dispersal, such as P. downsi, can maintain high levels of virulence. In combination with ineffective host defense mechanisms, introduced parasites can lead to severe host population declines, even extinctions