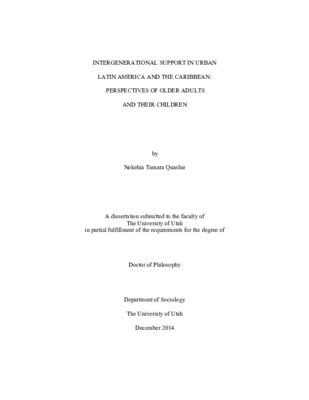 dissertationLatin American and Caribbean countries are aging rapidly. The pace of this process along with the institutional and economic contexts varies across countries, but there are common regional norms. Across the region, the family unit continues to bear significant responsibility for the well-being of older adults and within the family, there are gender differentiated expectations for the provision and receipt of support. The stability of the family and the gender roles therein, with regard to support for older adults, takes on more significance in countries where mobility among younger adults is commonplace and fertility continues to decline. Using data from the 2000 Survey of Health Well-Being and Aging of Older Adults in Latin America and the Caribbean (SABE), this study provides a comparative assessment of intergenerational residential proximity and transfers of financial and functional support in the region among 9,259 older adults. It assesses the extent to which upward flows of support are conditioned by the prevailing economic and institutional contexts of aging as well as the gender systems of household organization in seven cities across the region. The findings reveal that patterns of residential proximity and support transfers in these cities generally differ according to the respective stage of demographic transition and the strength of social welfare systems in countries. Older adults in Montevideo are more likely to live further away from their children and to receive less support compared to those in Mexico City. Whereas older adults in Montevideo, Uruguay and Bridgetown, Barbados are less likely to receive financial support from children at further distances, older adults in Havana are not. Regarding gender, in all cities, except Buenos Aires, older women are more likely than men to receive support. Regional gender norms of sons being primarily responsible for economic support were not consistent across the cities. Altogether, findings reveal geographic proximity, gender systems, and macro level socioeconomic contexts shape intergenerational support