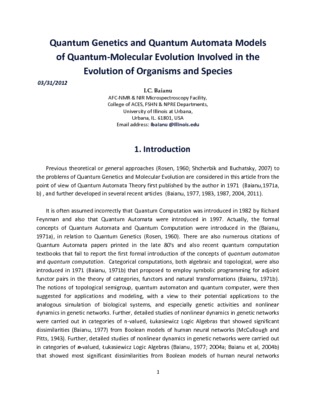 Previous theoretical or general approaches (Rosen, 1960; Shcherbik and Buchatsky, 2007) to the problems of Quantum Genetics and Molecular Evolution are considered in this article from the point of view of Quantum Automata Theory first published by the author in 1971 (Baianu,1971a, b) , and further developed in several recent articles (Baianu, 1977, 1983, 1987, 2004, 2011).The representation of genomes and Interactome networks in categories of many-valued logic LMn –algebras that are naturally transformed during biological evolution, or evolve through interactions with the environment provide a new insight into the mechanisms of molecular evolution, as well as organismal evolution, in terms of sequences of quantum automata. Phenotypic changes are expressed only when certain environmentally-induced quantum-molecular changes are coupled with an internal re-structuring of major submodules of the genome and Interactome networks related to cell cycling and cell growth. Contrary to the commonly held view of `standard’ Darwinist models of evolution, the evolution of organisms and species occurs through coupled multi-molecular transformations induced not only by the environment but actually realized through internal re-organizations of genome and interactome networks. The biological, evolutionary processes involve certain epigenetic transformations that are responsible for phenotypic expression of the genome and Interactome transformations initiated at the quantum-molecular level. It can thus be said that only quantum genetics can provide correct explanations of evolutionary processes that are initiated at the quantum—multi-molecular levels and propagate to the higher levels of organismal and species evolution. Biological evolution should be therefore regarded as a multi-scale process which is initiated by underlying quantum (coupled) multi-molecular transformations of the genomic and interactomic networks, followed by specific phenotypic transformations at the level of organism and the variable biogroupoids associated with the evolution of species which are essential to the survival of the species. The theoretical framework introduced in this article also paves the way to a Quantitative Biology approach to biological evolution at the quantum-molecular, as well as at the organismal and species levels. This is quite a substantial modification of the `established’ modern Darwinist, and also of several so-called `molecular evolution’ theories