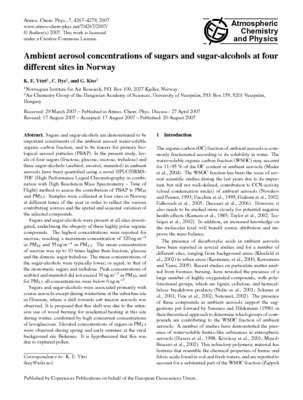 Sugars and sugar-alcohols are demonstrated to be important constituents of the ambient aerosol water-soluble organic carbon fraction, and to be tracers for primary biological aerosol particles (PBAP). In the present study, levels of four sugars (fructose, glucose, sucrose, trehalose) and three sugar-alcohols (arabitol, inositol, mannitol) in ambient aerosols have been quantified using a novel HPLC/HRMS-TOF (High Performance Liquid Chromatography in combination with High Resolution Mass Spectrometry &amp;ndash; Time of Flight) method to assess the contribution of PBAP to PM&gt;sub&gt;10&lt;/sub&gt; and PM&lt;sub&gt;2.5&lt;/sub&gt;. Samples were collected at four sites in Norway at different times of the year in order to reflect the various contributing sources and the spatial and seasonal variation of the selected compounds. &lt;br&gt;&lt;br&gt; Sugars and sugar-alcohols were present at all sites investigated, underlining the ubiquity of these highly polar organic compounds. The highest concentrations were reported for sucrose, reaching a maximum concentration of 320 ng m&lt;sup&gt;&amp;minus;3&lt;/sup&gt; in PM&lt;sub&gt;10&lt;/sub&gt; and 55 ng m&lt;sup&gt;&amp;minus;3&lt;/sup&gt; in PM&lt;sub&gt;2.5&lt;/sub&gt;. The mean concentration of sucrose was up to 10 times higher than fructose, glucose and the dimeric sugar trehalose. The mean concentrations of the sugar-alcohols were typically lower, or equal, to that of the monomeric sugars and trehalose. Peak concentrations of arabitol and mannitol did not exceed 30 ng m&lt;sup&gt;&amp;minus;3&lt;/sup&gt; in PM&lt;sub&gt;10&lt;/sub&gt;, and for PM&lt;sub&gt;2.5&lt;/sub&gt; all concentrations were below 6 ng m&lt;sup&gt;&amp;minus;3&lt;/sup&gt;. &lt;br&gt;&lt;br&gt; Sugars and sugar-alcohols were associated primarily with coarse aerosols except during wintertime at the suburban site in Elverum, where a shift towards sub micron aerosols was observed. It is proposed that this shift was due to the intensive use of wood burning for residential heating at this site during winter, confirmed by high concurrent concentrations of levoglucosan. Elevated concentrations of sugars in PM&lt;sub&gt;2.5&lt;/sub&gt; were observed during spring and early summer at the rural background site Birkenes. It is hypothesized that this was due to ruptured pollen