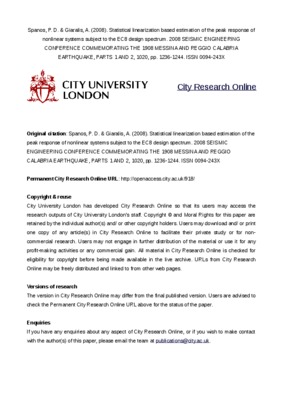 A stochastic approach is proposed to obtain reliable estimates of the peak response of nonlinear systems to excitations specified via a response∕design seismic spectrum. This is achieved without resorting to numerical integration of the governing nonlinear equations of motion. First, a numerical scheme is utilized to derive a power spectrum which is compatible in a stochastic sense to a given elastic design spectrum. This spectrum is then treated as the excitation spectrum in the context of the statistical linearization method to determine effective parameters, damping and stiffness, corresponding to an equivalent linear system (ELS). The obtained parameters are used in conjunction with the linear design spectrum, for various values of damping, to estimate the response of certain nonlinear systems. The case of single‐degree‐of‐freedom systems with cubic stiffness nonlinearity and hysteretic systems whose restoring force traces a bilinear law are considered in conjunction with the elastic design spectrum prescribed by the European aseismic code provisions (EC8). Monte Carlo simulations pertaining to an ensemble of non‐stationary EC 8 design spectrum compatible accelerograms are conducted to confirm that the average peak response of the nonlinear systems compare reasonably well with that of the ELS. This is true, even in cases where the response of the nonlinear oscillators deviates significantly from the linear one. In this manner, the proposed approach yields ELS which can reliably replace the original nonlinear systems in carrying out computationally efficient analyses in the initial stages of the aseismic design of structures under severe seismic excitations. Furthermore, the potential of this approach for developing inelastic design spectra from a given elastic design spectrum is established