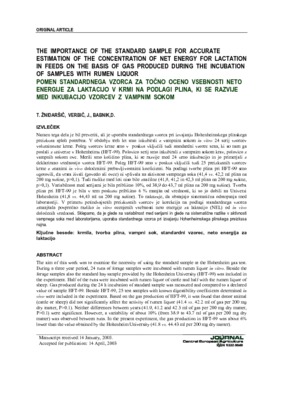 The aim of this work was to examine the necessity of using the standard sample at the Hohenheim gas test. During a three year period, 24 runs of forage samples were incubated with rumen liquor in vitro. Beside the forage samples also the standard hay sample provided by the Hohenheim University (HFT-99) was included in the experiment. Half of the runs were incubated with rumen liquor of cattle and half with the rumen liquor of sheep. Gas produced during the 24 h incubation of standard sample was measured and compared to a declared value of sample HFT-99. Beside HFT-99, 25 test samples with known digestibility coefficients determined in vivo were included in the experiment. Based on the gas production of HFT-99, it was found that donor animal (cattle or sheep) did not significantly affect the activity of rumen liquor (41.4 vs. 42.2 ml of gas per 200 mg dry matter, P&gt;0.1). Neither differences between years (41.9, 41.2 and 42.3 ml of gas per 200 mg dry matter, P&gt;0.1) were significant. However, a variability of about 10% (from 38.9 to 43.7 ml of gas per 200 mg dry matter) was observed between runs. In the present experiment, the gas production in HFT-99 was about 6% lower than the value obtained by the Hohenheim University (41.8 vs. 44.43 ml per 200 mg dry matter). This indicates a systematic error between the laboratories. In the case of twenty-five test samples, correction on the basis of the standard sample reduced the average difference of the in vitro estimates of net energy for lactation (NEL) from the in vivo determined values. It was concluded that, due to variation between runs and systematical differences in rumen liquor activity between two laboratories, the results of Hohenheim gas test have to be corrected on the basis of standard sample