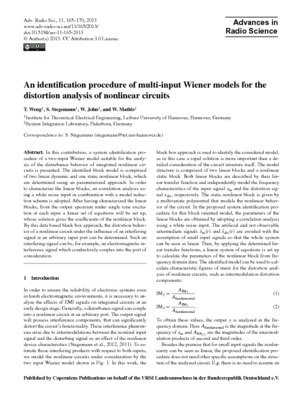 In this contribution, a system identification procedure of a two-input Wiener model suitable for the analysis of the disturbance behavior of integrated nonlinear circuits is presented. The identified block model is comprised of two linear dynamic and one static nonlinear block, which are determined using an parameterized approach. In order to characterize the linear blocks, an correlation analysis using a white noise input in combination with a model reduction scheme is adopted. After having characterized the linear blocks, from the output spectrum under single tone excitation at each input a linear set of equations will be set up, whose solution gives the coefficients of the nonlinear block. By this data based black box approach, the distortion behavior of a nonlinear circuit under the influence of an interfering signal at an arbitrary input port can be determined. Such an interfering signal can be, for example, an electromagnetic interference signal which conductively couples into the port of consideration