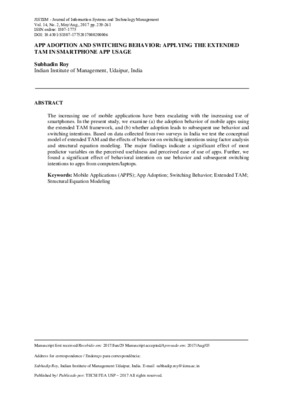 The increasing use of mobile applications have been escalating with the increasing use of smartphones. In the present study, we examine (a) the adoption behavior of mobile apps using the extended TAM framework, and (b) whether adoption leads to subsequent use behavior and switching intentions. Based on data collected from two surveys in India we test the conceptual model of extended TAM and the effects of behavior on switching intentions using factor analysis and structural equation modeling. The major findings indicate a significant effect of most predictor variables on the perceived usefulness and perceived ease of use of apps. Further, we found a significant effect of behavioral intention on use behavior and subsequent switching intentions to apps from computers/laptops