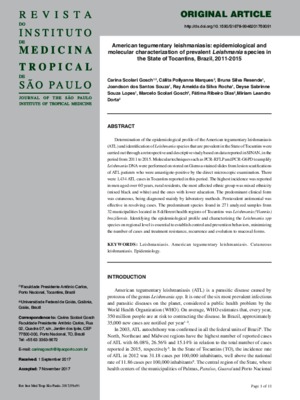 Determination of the epidemiological profile of the American tegumentary leishmaniasis (ATL) and identification of Leishmania species that are prevalent in the State of Tocantins were carried out through a retrospective and descriptive study based on data reported in SINAN, in the period from 2011 to 2015. Molecular techniques such as PCR-RFLP and PCR-G6PD to amplify Leishmania DNA were performed on stored on Giemsa-stained slides from lesion scarifications of ATL patients who were amastigote-positive by the direct microscopic examination. There were 1,434 ATL cases in Tocantins reported in this period. The highest incidence was reported in men aged over 60 years, rural residents, the most affected ethnic group was mixed ethnicity (mixed black and white) and the ones with lower education. The predominant clinical form was cutaneous, being diagnosed mainly by laboratory methods. Pentavalent antimonial was effective in resolving cases. The predominant species found in 271 analyzed samples from 32 municipalities located in 8 different health regions of Tocantins was Leishmania (Viannia) braziliensis. Identifying the epidemiological profile and characterizing the Leishmania spp species on regional level is essential to establish control and prevention behaviors, minimizing the number of cases and treatment resistance, recurrence and evolution to mucosal forms