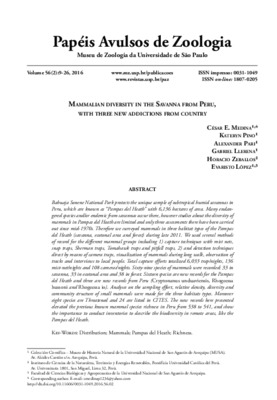 Mammalian diversity in the Savanna from Peru, with three new addictions from country

Bahuaja Sonene National Park protects the unique sample of subtropical humid savannas in Peru, which are known as “Pampas del Heath” with 6,136 hectares of area. Many endangered species and/or endemic from savannas occur there, however studies about the diversity of mammals in Pampas del Heath are limited and only three assessments there have been carried out since mid‑1970s. Therefore we surveyed mammals in three habitat types of the Pampas del Heath (savanna, ecotonal area and forest) during late 2011. We used several methods of record for the different mammal groups including 1) capture techniques with mist nets, snap traps, Sherman traps, Tomahawk traps and pitfall traps, 2) and detection techniques direct by means of camera traps, visualization of mammals during long walk, observation of tracks and interviews to local people. Total capture efforts totalized 6,033 trap/nights, 136 mist-net/nights and 108 cameras/nights. Sixty-nine species of mammals were recorded: 33 in savanna, 33 in ecotonal area and 38 in forest. Sixteen species are new records for the Pampas del Heath and three are new records from Peru (Cryptonanus unduaviensis, Rhogeessa hussoni and Rhogeessa io). Analyses on the sampling effort, relative density, diversity and community structure of small mammals were made for the three habitats types. Moreover eight species are Threatened and 24 are listed in CITES. The new records here presented elevated the previous known mammal species richness in Peru from 538 to 541, and show the importance to conduct inventories to describe the biodiversity in remote areas, like the Pampas del Heath