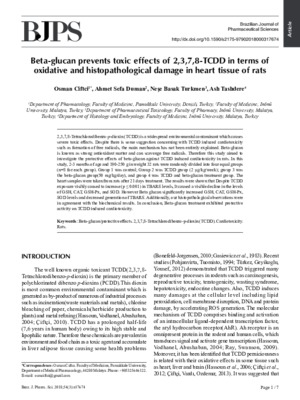 Beta-glucan prevents toxic effects of 2,3,7,8-TCDD in terms of oxidative and histopathological damage in heart tissue of rats

2,3,7,8-Tetrachlorodibenzo-p-dioxin (TCDD) is a widespread environmental contaminant which causes severe toxic effects. Despite there is some suggestion concerning with TCDD induced cardiotoxicity such as formation of free radicals, the main mechanism has not been entirely explained. Beta-glucan is known as strong antioxidant matter and can scavenge free radicals. Therefore this study aimed to investigate the protective effects of beta-glucan against TCDD induced cardiotoxicity in rats. In this study, 2-3 months of age and 190-250 g in weight 32 rats were randomly divided into four equal groups (n=8 for each group). Group 1 was control; Group 2 was TCDD group (2 µg/kg/week); group 3 was the beta-glucan group(50 mg/kg/day), and group 4 was TCDD and beta-glucan treatment group. The heart samples were taken from rats after 21 days treatment. The results were shown that Despite TCDD exposure visibly caused to increase (p ≤ 0.001) in TBARS levels, It caused a visible decline in the levels of GSH, CAT, GSH-Px, and SOD. However Beta glucan significantly increased GSH, CAT, GSH-Px, SOD levels and decreased generation of TBARS. Additionally, our histopathological observations were in agreement with the biochemical results. In conclusion, Beta-glucan treatment exhibited protective activity on TCDD induced cardiotoxicity