The purpose of this study is to identify the lack of discipline among student in secondary schools in the Kubang Pasu district. The factor(s) that could possibly and considerably influenced such in-discipline has been tentatively identified as the school setting, the student’s disposition itself, peer groups and the general environment itself. For the first six months of 1997, 378 secondary school students in the Kubang Pasu district have been identified has having disciplinary problems. The offenses have been categorized, as not attending classes, smoking fighting truancy and sexual misbehavior/predilection. These are, accordingly, the most frequent recorded cases of indiscipline in the schools. The results obtained from a sample of 197 problematic students together with their parents were subsequently analyzed. There was significant correlation between disciplinary problems and teacher attitude, class atmosphere, family financial disposition, lack of sexual knowledge, immediate family misunderstandings, peer group attitudes, work and marital status of the guardian. The results of a subsequent workshop by 140 peer counselors (Pembimbing Rakan Sebaya - PRS) from the Kubang Pasu district also found that teachers’ attitude towards their students’, boring presentation of material being taught, media expose, peer groups and family problems would also give rise to disciplinary problems. Teachers' disposition towards their students and the class’s conducive learning atmosphere were very significant in our study. This is also highly cm-related to the non-attendance of classes, which is the most recorded kind of in-discipline among the students of this district. A final and disturbing concluding aspect uncovered was the pervasiveness of sexual harassment incidences, that is perceived to eventually lead to other more serious cases, if there is no action taken now 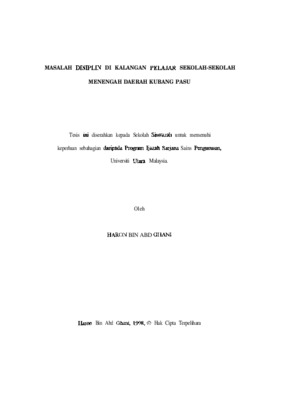