This paper presents a modeling study aiming at quantifying the possible impact of soil characteristics on the hydrological response of small ungauged catchments in a context of extreme events. The study focuses on the September 2002 event in the Gard region (South-Eastern France), which led to catastrophic flash-floods. The proposed modeling approach is able to take into account rainfall variability and soil profiles variability. Its spatial discretization is determined using Digital Elevation Model (DEM) and a soil map. The model computes infiltration, ponding and vertical soil water distribution, as well as river discharge. In order to be applicable to ungauged catchments, the model is set up without any calibration and the soil parameter specification is based on an existing soil database. The model verification is based on a regional evaluation using 17 estimated discharges obtained from an extensive post-flood investigation. Thus, this approach provides a spatial view of the hydrological response across a large range of scales. To perform the simulations, radar rainfall estimations are used at a 1 km&lt;sup&gt;2&lt;/sup&gt; and 5 min resolution. To specify the soil hydraulic properties, two types of pedotransfer function (PTF) are compared. It is shown that the PTF including information about soil structure reflects better the spatial variability that can be encountered in the field. The study is focused on four small ungauged catchments of less than 10 km&lt;sup&gt;2&lt;/sup&gt;, which experienced casualties. Simulated specific peak discharges are found to be in agreement with estimations from a post-event in situ investigation. Examining the dynamics of simulated infiltration and saturation degrees, two different behaviors are shown which correspond to different runoff production mechanisms that could be encountered within catchments of less than 10 km&lt;sup&gt;2&lt;/sup&gt;. They produce simulated runoff coefficients that evolve in time and highlight the variability of the infiltration capacity of the various soil types. Therefore, we propose a cartography distinguishing between areas prone to saturation excess and areas prone only to infiltration excess mechanisms. The questions raised by this modeling study will be useful to improve field observations, aiming at better understanding runoff generation for these extreme events and examine the possibility for early warning, even in very small ungauged catchments 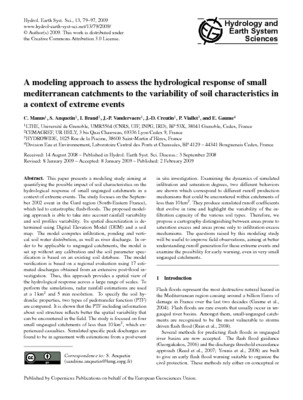