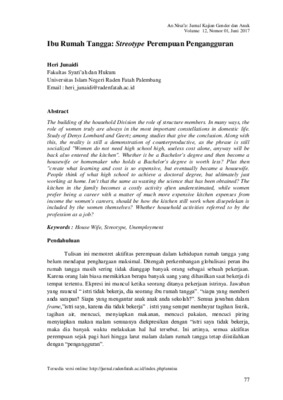 The building of the household Division the role of structure members. In many ways, the role of women truly are always in the most important constellations in domestic life. Study of Denys Lombard and Geertz among studies that give the conclusion. Along with this, the reality is still a demonstration of counterproductive, as the phrase is still socialized "Women do not need high school high, useless cost alone, anyway will be back also entered the kitchen". Whether it be a Bachelor's degree and then become a housewife or homemaker who holds a Bachelor's degree is worth less? Plus then "create what learning and cost is so expensive, but eventually became a housewife. People think of what high school to achieve a doctoral degree, but ultimately just working at home. Isn't that the same as wasting the science that has been obtained? The kitchen in the family becomes a costly activity often underestimated, while women prefer being a career with a matter of much more expensive kitchen expenses from income the women's careers, should be how the kitchen still work when disepelekan is included by the women themselves? Whether household activities referred to by the profession as a job