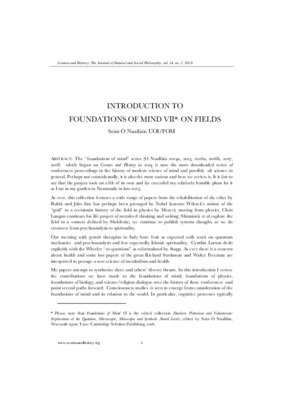 Introduction to Foundations of Mind VII: On Fields

The "foundations of mind" series (O Nualláin 2014a, 2015, 2016a, 2016b, 2017, 2018)  which began on Cosmos and History in 2014 is now the most downloaded series of conferences proceedings in the history of modern science of mind and possibly  alt science in general. Perhaps not coincidentally, it is also the most various and here we review it. It is fair to say that the project took on a life of its own and far exceeded my relatively humble plans for it as I sat in my garden in Normandy in late 2013.  As ever, this collection features a wide range of papers from the rehabilitation of the ether by Rubik and Jabs that has perhaps been presaged by Nobel laureate Wilczek's notion of the "grid" to a revisionist history of the field in physics by Meucci; moving from physics, Chris Langan continues his life project of metalevel thinking and writing; Shinninck et al explore the field in a context defined by Sheldrake; we continue to publish systems thought, as we do crossover from psychoanalysis to spirituality. Our meeting with gestalt therapists in Italy bore fruit as expected with work on quantum mechanics  and psychoanalysis and less expectedly Islamic spirituality;  Cynthia Larson deals explicitly with the Wheeler "20 questions" as reformulated by Stapp. As ever there is a concern about health and some lost papers of the great Richard Strohman and Walter Freeman are interpreted to presage a new science of metabolism and health. My papers attempt to synthesize these and others' diverse thrusts. In this introduction I review the contributions we have made to the foundations of mind, foundations of physics, foundations of biology, and science/religion dialogue over the history of these conferences  and point several paths forward.  Consciousness studies  is seen to emerge from consideration of the foundations of mind and its relation to the world. In particular, cognitive processes typically admit of the time intervals appropriate for the sampling speed of consciousness in tenths of seconds. At a  certain point, mind breaks free from its fetters in biology with observer status requiring that the laws of physics exert a top-down influence on biology. The fact that the brain is now capable of arbitrary levels of hierarchy changes the dynamics of biological fields at lower levels of the hierarchy. The observer is described with physics concepts like relativity and measurement in quantum mechanics; again, the sampling speed of consciousness can be achieved through the quantum zeno effect as Stapp has shown. The overarching goal remains to ground higher-order speculation about healing, mentation and metabolism in insights and observations that are attested cutting-edge science often from the world's greatest universities.  It cannot be long now before a hierophant, perhaps from the community of creation spirituality, generates a powerful new expression of what it is to be in the world defined by these new discoveries