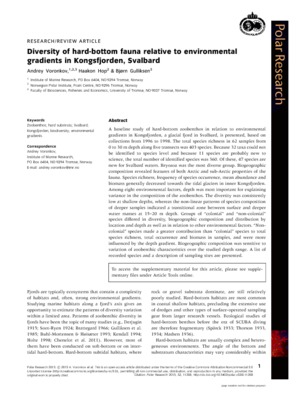 A baseline study of hard-bottom zoobenthos in relation to environmental gradients in Kongsfjorden, a glacial fjord in Svalbard, is presented, based on collections from 1996 to 1998. The total species richness in 62 samples from 0 to 30 m depth along five transects was 403 species. Because 32 taxa could not be identified to species level and because 11 species are probably new to science, the total number of identified species was 360. Of these, 47 species are new for Svalbard waters. Bryozoa was the most diverse group. Biogeographic composition revealed features of both Arctic and sub-Arctic properties of the fauna. Species richness, frequency of species occurrence, mean abundance and biomass generally decreased towards the tidal glaciers in inner Kongsfjorden. Among eight environmental factors, depth was most important for explaining variance in the composition of the zoobenthos. The diversity was consistently low at shallow depths, whereas the non-linear patterns of species composition of deeper samples indicated a transitional zone between surface and deeper water masses at 15&#x2013;20 m depth. Groups of &#x201C;colonial&#x201D; and &#x201C;non-colonial&#x201D; species differed in diversity, biogeographic composition and distribution by location and depth as well as in relation to other environmental factors. &#x201C;Non-colonial&#x201D; species made a greater contribution than &#x201C;colonial&#x201D; species to total species richness, total occurrence and biomass in samples, and were more influenced by the depth gradient. Biogeographic composition was sensitive to variation of zoobenthic characteristics over the studied depth range. A list of recorded species and a description of sampling sites are presented