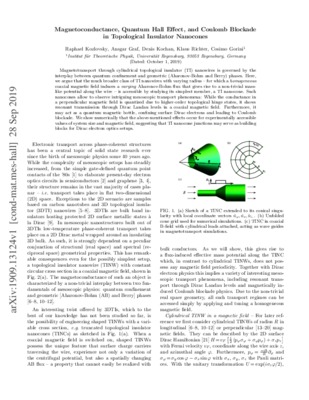 Magnetotransport through cylindrical topological insulator (TI) nanowires is governed by the interplay between quantum confinement and geometric (Aharonov-Bohm and Berry) phases. Here, we argue that the much broader class of TI nanowires with varying radius -- for which a homogeneous coaxial magnetic field induces a varying Aharonov-Bohm flux that gives rise to a non-trivial mass-like potential along the wire -- is accessible by studying its simplest member, a TI nanocone. Such nanocones allow to observe intriguing mesoscopic transport phenomena: While the conductance in a perpendicular magnetic field is quantized due to higher-order topological hinge states, it shows resonant transmission through Dirac Landau levels in a coaxial magnetic field. Furthermore, it may act as a quantum magnetic bottle, confining surface Dirac electrons and leading to Coulomb blockade. We show numerically that the above-mentioned effects occur for experimentally accessible values of system size and magnetic field, suggesting that TI nanocone junctions may serve as building blocks for Dirac electron optics setups